This remarkable 30-minute audio, the second in the Meditation series using InlightTunes™ technology, promotes even deeper states of relaxation.

It’s a state associated with:

MEDITATION 201 makes feeling a deep, clear and connected state as easy as putting on your headphones and pushing the play button! 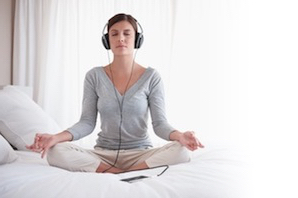 What are some of the main benefits of meditation?

What are the main brainwave states and the effects associated with them?

Your dominant brain wave frequency at any given time is related to the state you’re in.

What is the science behind InlightTunes™ brainwave entrainment technology?

In 1839, German scientist Heinrich Wilhelm Dove discovered an interesting phenomenon. Though it’s impossible for the human ear to hear sounds lower than about 20Hz, if you play the sound of an audible frequency in one ear, and a sound of a different audible frequency in the other ear, the brain deciphers the sound as the difference between the two sounds.

For example, if the left ear hears 100Hz, and the right ear hears 90Hz, the brain interprets a sound of 10Hz. That sound is called a binaural beat.

With the publishing of Dr. Gerald Oster’s article “Auditory Beats in the Brain” (Scientific American, 1973), new insight was introduced regarding the cognitive and neurological applications of binaural beats. Dr. Oster, a research scientist at Mt. Sinai Medical Center in New York, discovered that binaural beats are processed by different neurological pathways in the brain than ordinary sounds are.

Binaural beats have been credibly documented to activate various sites in the brain. Ordinarily, you would not be able to consciously entrain to these frequencies, because you can’t “hear” them. Binaural beat technology makes it possible.

Brainwave entrainment is used by many to induce various beneficial states from greater relaxation to better focus to enhanced creativity. Some promising studies have even shown that, with repeated use, a reorganization and balancing of the brain’s hemispheres occurs.

What's the difference between meditation and hypnosis?

The beneficial effects of meditation and hypnosis are numerous and well-documented. They are similar in that they both use focused states of awareness in order to access deeper states of relaxation. The difference is that therapeutic hypnosis usually focuses on specific goals and behavioral changes, whereas meditation is more about raising your threshold level to stress in the world around you, developing greater awareness, and enjoying a more calm and centered nature.

and receive our monthly newsletter and special discounts

You have Successfully Subscribed!